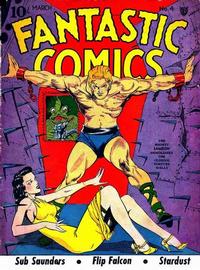 [The Giant Robots of Kilgor] (Table of Contents: 1)

[Invasion of the Three-Armed Men] (Table of Contents: 2)

The Legend of the Haunted Well (Table of Contents: 3)

[The Silent Explosive] (Table of Contents: 4)

Lost In Time (Table of Contents: 5)

[Headless Men of the Gold Comet] (Table of Contents: 6)

The first line of text reads: "Space" has just received a radio call from a lunar station, inviting him and Dianna to visit the moon for a close-up of a new comet."

First Line of Dialogue or Text
Deep down in a gloomy subterranean subcellar...
Characters
Professor Fiend

The first line of text reads: "Stardust, the scientific marvel whose vast interplanetary knowledge has given him greater powers than anybody else, has learned through his scopes that a mad giant experimenter, who dwells in the Gobi desert, is planning to destroy the world."

[The Problem of Prince Pizga] (Table of Contents: 10)