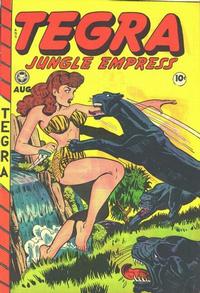 The Soldiers From Saturn! (Table of Contents: 1)

This was originally intended to be a Rulah, Jungle Goddess story that was altered to become a Tegra story (per Anthony Durant, June 17, 2006).

The "President" is not named but looks like U.S. President Harry S. Truman. He says "millions for defense but not one cent for tribute," which was a quote by U.S. Senator Robert Goodloe Harper in reference to the 1797-8 "XYZ Affair."

Malik and Sabio had previously appeared in "Atom World of Selura" in The Bouncer (1944 series) #[10] 1944. However, Malik looks completely different here and Sabio in the earlier story was a little person, while in this story he's a giant and the little person is called Yehudi.

The Green Girl (Table of Contents: 4)

Genre
superhero
Characters
Blue Beetle [Dan Garrett]; Ootan; Joe; Joan Mason; Jade; Mike; Spats Morley
Synopsis
Ten Asian women have been murdered in Chinatown, each marked with the outline of a woman in green ink. Reporter Joan Mason and Blue Beetle investigate. They are captured by Jade, who runs a criminal enterprise; the "green girls" are illegal immigrants who work for her. Rival gangster Spats is killing the women in an attempt to take over Jade's territory. Blue Beetle and Joan smash both gangs.
Reprints