Continued from Mark Hazzard: Merc #11 (September 1987).
This issue has variants: 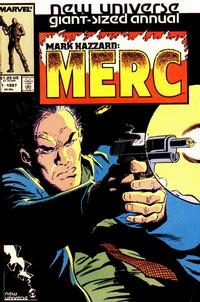 A Matter of Lives and Death! (Table of Contents: 1)

Genre
adventure; war
Characters
Mark Hazzard (dies); Louis "Treetop" Barrington; Lincoln Griffin; Sgt. Major Peel; Priestess; Mal Rossi; Joan Hazzard; Scott Hazzard; the Sensei (introduction, flashback, dies); Leonard Hazzard (flashback); Margaret Hazzard (flashback)
Synopsis
Sgt. Major Peel and Lincoln Griffin are in Afghanistan training Mujahedin rebels to help them fight the Soviets invading their country. At the same time, in a New York hospital, Mark Hazzard is in a coma and his friends and family recount their histories with him. After a failed operation, the doctors explain that Hazzard has no brain activity and is only being kept alive by machine. All agree that he wouldn't want to live that way and have the doctors turn the machines off, letting him die.