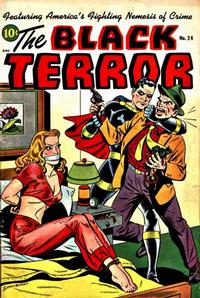 The Revenge of Red Ann! (Table of Contents: 3)

Artwork signed "Jerry Robinson and Mort Meskin". They are known to have switched back and forth on penciling and inking. These Pencil and ink credits are from Cesar Diaz.

From the Black Terror Scrap Book (Table of Contents: 4)

Four different one panel cartoons highlight certain activities: how fast the punch of boxer Joe Louis is (127 mph); how far a famed frog leaped in 1937 in Sarasota, Florida (19 feet); how grueling the sport of lacrosse really is; and the fact that a paratrooper jumping from 20,ooo' will reach the ground in just 90 seconds....if his chute doesn't open!

The Lancers Are Coming (Table of Contents: 5)

Job Number
B-331
Genre
war
Characters
Bert Collins; Golambi (Bert's native companion); river pirates [Bar-lema (leader of the pirates); rest un-named] (villains)
Synopsis
An English missionary in India decides to send his son Bert back to the U.S. until the warring in India came to an end. But, while traveling on a ship, river pirates stop the vessel and decide to hold Bert for ransom.
Keywords
Bengal Lancers; Brahmaputra River; India

The Plundering Pooch! (Table of Contents: 6)

No job number on story.

The last panel on page two has the name of the story's inker, "Mayo", on a store sign.

Oddity: Tim is shown not wearing his mask in many panels of the story.

Signature is consistent with Parker’s signatures from Manhunt #11 (August, 1948).

Larceny in the Lighthouse! (Table of Contents: 8)

Signed "Jerry Robinson / Mort Meskin". Likely they switched off in the art.

The Gray Shadow (Table of Contents: 9)

Genre
western-frontier
Characters
Danny Hutton; Sheriff Hutton (Danny's father); The Gray Shadow [Buck Shaw] (villain)
Synopsis
While riding along, Danny hears gunshots and realizes that his father has been out trying to track down the outlaw called the Gray Shadow.
Keywords
Cross-in-a-Box Ranch

Job Number
AC-725
First Line of Dialogue or Text
Nobody buy-a da banana!
Genre
humor
Characters
Rico (street peddler)
Synopsis
Rico was having trouble selling bananas at any price, until he thought of an ideal way to get rid of them all.

Job Number
CC-667
Genre
crime
Characters
The Crime Crushers [Steve Barry; Ploopie Carr; Abner Hastings (owner of Hastings Airplane Company); Horace Furman (villain, Hasting's competitor); Salvati (villain); Jimmy (villain)
Synopsis
Steve and Ploopie are desperate: they are down to their last $5, and unless they find a client quickly, they'll have to do without food. They are approached by a Mr. Hastings, who earlier entered a cab, then suddenly awoke in an alley to find his wallet and some valuable postwar airplane designs missing.
Keywords
Lane Alley; Palmer Street