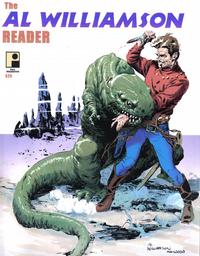 This page lists the original source for each of the stories in this volume. Art collaborators for each story are also listed.

Synopsis
Introduction is accompanied by photographs and illustrations.

The erroneous Williamson-Frazetta credits can also be found in The Fleagles (Pure Imagination, 2011) and Steve Ringgenberg's Al Williamson biography in The EC Comics Library #3 - 50 Girls 50 And Other Stories (Fantagraphics, 2012 series), though Ringgenberg, alerted to the error by Roger Hill, tried to correct the credits before publication. (Ringgenberg via the GCD Error Tracker.)

Characters
Space Ace; Dalla; Flor; Benton Thorpe
Synopsis
Space Ace sets out to collect the reward for finding missing scientist Benton Thorpe, but instead finds a woman drifting in space. He rescues Dalla and hears her tell how her ship was invaded by aliens and Thorpe was captured. He follows her ship to Titan, but Dalla's story was all just part of a trap planned by Flor to capture him. Flor, the leader of the space pirates, intends to get revenge on Space Ace for tricking her in a previous scheme.
Reprints

"Sunny's Sunday" is the story title, but the boy's name is "Sonny".

The index for the original story lists Frank Frazetta as the penciller. The story itself is signed by Al Williamson. The credits listed in this issue indicate "with Frank Frazetta" rather than breaking down the credits for pencils/inks as done with some of the other stories.

Characters
John Wayne; Bonanza Bill; Nathaniel Hilton; Uncle Ben; Doctor Coe; Preacher Brown
Synopsis
When Bonanza Bill discovers a buried fortune, he relates the tale of Nathaniel Hilton. Orphan Nathaniel was raised by a cruel uncle. One day an 'accident' with a branding iron severely scarred his face. Unable to get an honest job due to his appearance, he turned to crime. Trying to flee a posse after pulling his latest job, he seemed doomed to die in the desert but was rescued by an Indian. He left the loot buried in the desert because he finally found friendship living with the Indian tribe.
Reprints

The credits page lists "with Frank Frazetta" for the art.

The Return of the Werewolf (Table of Contents: 8)

Characters
Dave; Ginny; Dr. Parker
Synopsis
Dave is unable to afford a normal fur coat for his fiance, so he brings Ginny a wolf skin as a gag. However, that night a werewolf enters Ginny's house, looking for his pelt.
Reprints

Drum of Doom (Table of Contents: 9)

Characters
Annette; Fred Taylor (Annette's manager)
Synopsis
Annette and Fred travel to Haiti to observe a native dance that she can use in her stage act. They offer to pay for the drum used in the native dance, but the old witch doctor warns them to go away. However, the witch doctor's son overhears their request and brings them the drum in exchange for money. When Annette starts dancing on the drum, zombies start leaving their graves and begin moving toward the drum.
Reprints

Contents page does not list any credits for this story. Credits listed here are taken from sequence of original story.

The Flapping Head (Table of Contents: 10)

Characters
Bud; Sally; Silvana
Synopsis
With his job of restoring an old European castle almost complete, Bud brings Sally there to marry her and honeymoon in the castle. The ominous ramblings of an old woman are ignored until Sally sees a flying head one night.
Reprints

Art credits in this issue differ from credits listed in original story.

The Phantom Fliers (Table of Contents: 11)

Characters
Bill Chalmers; Nurse Nora Bentley; Werner Borth; Nakamoto; Zukoff
Synopsis
Bill's job of flying a rebuilt World War II fighter plane from Assam, India to Karachi is routine until he has engine trouble. He contemplates bailing out over the harsh mountain terrain until he spots a squadron of old planes signaling him to land at an uncharted airfield. Before Bill can explain his situation, the other fliers assume he is a new recruit sent to join them. He soon discovers that the other fliers are dead men condemned to relive the pattern of sadistic missions. Only he and Nora are really alive.
Reprints

This issue provides no credits for this story. The credits listed here are from the index of the original story.

Characters
Captain Comet; Captain Kidd; Captain Hughes
Synopsis
Captain Kidd, leader of a band of space pirates, abducts Captain Comet and brings him to his base on the planetoid Xenor.
Reprints

The Iron Shirt (Table of Contents: 13)

This issue credits Williamson with the pencils and Severin with the inks.

This issue credits Williamson as the penciler and Severin as the inker for this story.

This issue lists no credits for this story.

Menace from the Stars! (Table of Contents: 16)

The Secret of the Haunted House (Table of Contents: 17)

Part 1 of the 3 part story of Custer's last stand.

Part 2 of the story of Custer's last stand.

The Battle of Little Bighorn (Table of Contents: 20)

Conclusion of the story of Custer's last stand.

The Drum Beats at Midnight! (Table of Contents: 21)

The Quiet Stranger (Table of Contents: 22)

The Law West of the Pecos (Table of Contents: 24)

Beware the Future! (Table of Contents: 26)

Job Number
T-111
Characters
Luther Zorn; Emma Zorn
Synopsis
A physicist invents a time machine, but when it shows an idyllic future it causes people to lose their motivation to improve the world.
Reprints

Characters
Aglio; Bracchus; Cassius
Synopsis
Aglio, favored gladiator of Mithras, has an agreement with Bracchus that he will have his freedom if he loses his match with Cassius. However, when the time comes, Bracchus gives the death sign. Eventually, Bracchus arranges Cassius' death as well. Then while Bracchus is reviewing the arena the night before the next big event, lions are released into the arena with him. Bracchus sees a figure in his box and pleads for help while attempting to pull himself up. However, he sees Cassius' ghost giving him the thumbs down sign.
Reprints