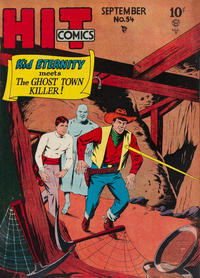 Faces and movement on page 3 are like Cataldo's signed Lefty Jim story in Crown Comics #16, and also faces, hats in sideview and horses with clumsy hooves and legs are the same as in #16. Especially faces on page 7. He vary very much in his drawing, even in signed stories in the same issue.

First Line of Dialogue or Text
May I serve you, your highness?
Genre
humor
Characters
Her Highness; Silk; Parrot (safe cracker)
Synopsis
Parrot is out of jail and visits Her Highness with hot money.

The face and eyes of the man on last page point to Valleau as most probable artist.

First Line of Dialogue or Text
Impy, you got me into this mess!
Characters
Lammypie (Introduction and only appearance)

Characters
Betty Bates; Larry; Mr. Meek (store keeper)
Synopsis
Jewels are smuggled from Europe, but no clue as to how it's being done, until Betty buys a miniatyre figure in a novelty store.

First Line of Dialogue or Text
I'd like to get my hands on the bilge-brained idiot...
Genre
humor; adventure
Characters
Bob Masters (marine); Swab Decker (sailor); Bulkhead Jones; Chiquita
Synopsis
Bulhead single-handedly cleans out a nest of gamblers.

Artwork was previously credited to Jack Cole (based on him being mentioned in Jerry Bails' Who's Who as working on this feature and the pointed noses and speedy action) but does not appear to be by him.