The majority of the stories in this issue appear to come from the Chesler shop, but several appear to have been freelance or are from unclear sources. The next two issues of this series, however, are all or almost all Chesler. 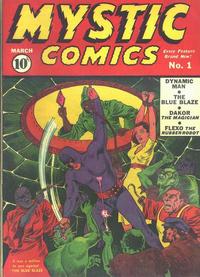 The blurb at the end of the story invites the reader to follow Flexo's adventures in the next issue of Daring Comics (note title mismatch - the feature remains in Mystic Comics).

Michael Vassallo, Jim Vadeboncoeur, Jr. and Hames Ware believe that E.C. Stoner may have assisted Binder on this, probably on inks and not pencils.

From the Chesler Shop.

[The Origin of the Blue Blaze] (Table of Contents: 3)

Genre
superhero
Characters
The Blue Blaze [Spencer Keen] (introduction, origin); Dr. Keen (introduction, death); Butch (villain); "Killer" Skehan (villain); Professor Maluski (villain, death)
Synopsis
Spencer Keen gains strength and durability after a death-like hibernation caused by a mysterious blue blaze his father had been studying. Having apparently died in 1852, he revives in 1940 and thwarts a mad scientist who intended to take over the world with an army of mind-controlled corpses.
Reprints

Probably Chesler Shop material, as Who's Who lists a "Harry Douglas" as possibly a member of that shop c. 1939-40, independent of its other theories about the "Harry / Douglas" signature.

[Journey to Cygni] (Table of Contents: 4)

Genre
science fiction
Characters
Zephyr Jones; Corky Grogan; Professor Reagan Lexico [the Mad Astronomer] (introduction); Tasi Lexico (introduction, the Professor's daughter); The Cygnian Dwarfs (villains, introduction for all, all die?)
Synopsis
Zephyr and Corky try again to reach Mars but are forced by a stowaway professor and his daughter to journey to the star Cygni instead.
Reprints

Not enough is known about Schwartz to place the origin of this feature. Cal Cagno was on staff at Timely eventually, and possibly already at this point. He had been at Chesler in 1937 according to Jerry Bails' Who's Who, but this feature lacks the typical thick panel borders of Chesler work.
Probably in-house / freelance work.

[The Green Terror] (Table of Contents: 5)

Newt Alfred was at Chesler but this lacks the typical thick borders of Chesler Shop work (including other Alfred work for that shop). Erisman was from Goodman's pulp organization.

1X does the detecting for the team, 2X is a walking encyclopedia, and 3X is the strong arm.

Genre
western-frontier
Characters
Tex Carr; Stella (Tex's fiancee); Tim (older cowhand in love with Stella); Bat Butler
Synopsis
Disressed because Stella prefers Tex to him, a cattle foreman decides to do nothing and allow a heated gunfight occur between the slower-on-the-draw Tex and Bat Butler.
Reprints

Art spotting by Dr. Michael J. Vassallo. According to Edgar Loftin, both Bjorklund and Stalnaker worked more in pulps than comics, leading to speculation that this text piece may even have been bought for one of Goodman's pulp magazines originally.

Art credits suggested by Jerry Bails's Who's Who (listed under "Deep Sea Demon" rather than "Dave Dean").

First published by the Harry "A" Chesler-edited Ultem Publications, Inc., this was reprinted twice by Centaur after it bought out Ultem before being reprinted a third time here.

The Blooded Ruby of Chung (Table of Contents: 8)

Genre
adventure
Characters
Dakor (introduction); Williams (introduction, Dakor's assistant); John Hargate (death); George Hargate (millionaire banker, father of John); Tom Denver [aka Smith] (villain, death); The Tuaregs (villains, enemies of the Foreign Legion, some die)
Synopsis
For a fee of $50,000, Dakor locates a sacred ruby stolen from a banker and returns it to the idol from which it originally came.
Reprints

[The Origin of Dynamic Man] (Table of Contents: 9)

While the name "Dynamic Man" is strongly associated with Chesler, and the stories in issues #2 and #3 were produced by Chesler personnel, this story lacks the characteristic thick panel borders. Almost nothing is known about Daniel Peters, so his signature does not help place the source of the feature.

Probably *not* from the Chesler Shop, but the actual origin is unknown.