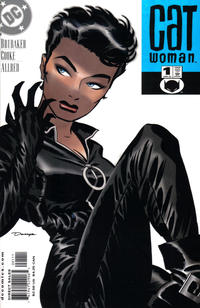 Anodyne Part One of Four (Table of Contents: 1)

First Line of Dialogue or Text
Old Gotham, the East End, far too late...
Genre
superhero
Characters
Clayface [Todd Russell] (as "Brian")(intro); Lisa; Catwoman [Selina Kyle]; Dr. Leslie Thompkins; Riddler [Edward Nigma]; Batman [Bruce Wayne]; Holly Robinson
Synopsis
On Gotham's East End, a man picks up a sex worker, but then kills her when she is upset by his face.
Selina Kyle, recently returned to Gotham, tries to decide what she's doing with her life. She is reunited with her old friend Holly, who she feels protective of. Holly lets her know that several sex workers have been killed over the past few weeks.
Reprints
Keywords
Dr. Thompkins East Side Clinic; East End; Gotham City; sex worker

First issue of a new ongoing series, following the events of the "Trail of the Catwoman" back up stories in Detective Comics (DC, 1937 series) #759-762 (and, chronologically, the "prequel" story Catwoman: Selina's Big Score (DC, 2002)).

Leslie Thompkins and Holly Robinson are established as supporting characters. Selina operates out of an abandoned tenement house she secretly bought early in her career.

Selina debuts a new costume in this issue, designed by Darwyn Cooke.

First appearance of the seventh Clayface, seen only in shadow and identified only as "Brian".

Introductory article to the new series by editorial, illustrated with small cover illustration of #2.