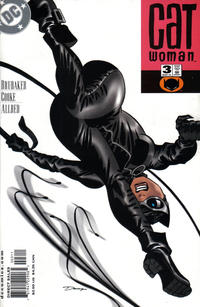 First Line of Dialogue or Text
Doctor Thompkins, I think I need more anasettic...
Genre
superhero
Characters
Dr. Leslie Thompkins; Catwoman [Selina Kyle]; Jerry; Chris; Holly Robinson; "Honest" Jay Little; Clayface [Todd Russell]
Synopsis
Selina tracks the car plates to a used car dealer who gives her a physical description of the suspect. She goes undercover, posing as a sex worker at an East End bar. She encounters him without realizing it, scaring him off, then realizes it was him and he can change his face. She searches the area for him. Meanwhile, "Todd" picks up another sex worker instead and takes her back to his place. He starts to lose control of the shape of his face and the woman runs out, panicking. As he starts to pursue, Selina arrives.
Reprints
Keywords
bar; cops; Dave's All Nighter; Dr. Thompkins East Side Clinic; East End; forensics; Gotham City; Honest Jay Little's Used Cars; operating theater; police; sex workers; warehouse

The suspect from the previous issues is here revealed to be a man who looks like Todd Russell, "the actor", but doesn't sound like the actor. We then learn he can change his face, quickly and easily.

The MAD Guide to the Sour and Sweet of Life (Table of Contents: 4)