This issue is Red Shield Continuity #23, and went on sale on time. "Printed by World Color Press, Inc, Montreal, QC, Canada. 01/06/10." It also features "World Against [S-shield]" promotion on the cover. 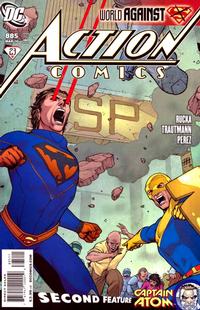 Genre
superhero
Characters
Nightwing [Chris Kent]; Flamebird [Thara Ak-Var]; Jax-Ur (also as Dr. Pillings); Kimiyo Hoshi [Doctor Light]; Mon-El; The Guardian [Jim Harper clone]; Science Police [Romundi [Car-Vex]; others]; Lois Lane; General Sam Lane; Lieutenant Hollister; Squad K [Sergeant Cloud [Knight Alpha]; Knight Seven; others]; S.T.A.R. Labs
Synopsis
Nightwing's aging is reversed, but as he and Flamebird try leaving S.T.A.R. Labs, they are confronted by Mon-El, the Guardian, and the Science Police. Instead of causing a scene, they surrender. The Guardian insists on confiscating the device that is keeping Nightwing's aging in check, to analyze it. He also sends Romundi inside the lab to do a sweep. Once inside, she speaks with Dr. Phillips/Jax-Ur in Kryptonese, revealing that she is really Car-Vex, one of the Kryptonians that Nightwing and Flamebird are searching for. Jax-Ur hides his findings about Flamebird from her. At Science Police headquarters, the prisoners are put into a red-sun room, where they are debriefed by the Guardian and Mon-El. When asked, they reveal that the leader of the group that earlier killed some of the Science Police was Commander Gor (Fer-Gor). Meanwhile, Romundi contacts General Lane, and then also plants a bomb in headquarters. Nightwing uses his phone call to summon Lois, who arrives and has more discussions with the group. The Guardian is starting to doubt the official line. General Lane arrives outside the building, with a new Squad K; Lois and the Guardian go out to talk with them. The Guardian says he will surrender the prisoners, but as they go into the building, he turns off the red-sun room, and as he and Mon-El fight with Squad K, the prisoners escape the building. But then the bomb explodes.

Go Behind the Scenes of the First Wave (Table of Contents: 3)

Previews the upcoming series on sale in March.