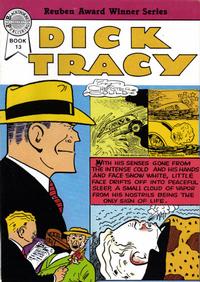 First Line of Dialogue or Text
By the way, Tracy.
Genre
adventure; crime; detective-mystery
Characters
Dick Tracy; Junior Tracy; Steve the Tramp; Little Face; Joe Ballivan; Loma; Chief Brandon; Charley Yemon
Synopsis
Compilation of daily and Sunday newspaper strips from July 13, 1941 through September 28, 1941. Tracy and Ballivan interfere with Little Face's plans to steal jewels. When a spying Tracy is in danger of falling from a high scaffold, circus performer Loma saves him. Little Face takes Loma hostage and escapes, only to be trapped in a cold storage locker. Charley rescues Little Face in hopes of cashing in, but Tracy arrests both. A reformed Steve the Tramp is released from prison and reconciles with Tracy and Junior.
Keywords
rehabilitation; taxi

When Junior first appeared, he was a small child being exploited by Steve the Tramp for crime.

Originally published in The Open Road For Boys (November, 1947). Spot art by Gould, including once example of his 1924 daily newspaper comic strip, "The Radio Cats." Large photo of Gould.

The Reuben (Table of Contents: 4)

Genre
non-fiction
Synopsis
Introduction to the Reuben award. List of winners from 1946 through 1985.
Keywords
Reuben award

Spot illustration of the trophy, by Goldberg.