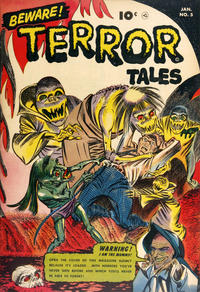 The Horrors of the 13th Stroke (Table of Contents: 1)

Genre
horror-suspense
Characters
The Mummy (Horror-Host)
Synopsis
Police inspector Hiram Castle comes into possession of a magic clock which transports people to another dimension on its thirteenth stroke. Behind a gateway of horrors fiendish ghouls are waiting for human victims.
Reprints

The Lonely One! (Table of Contents: 2)

Genre
horror-suspense
Characters
The Mummy (Horror-Host)
Synopsis
Two polar explorers have to spend months alone in an igloo. One of them goes insane.
Reprints

The Ghoul at Eldritch Manor! (Table of Contents: 3)

Unknown artist from Fawcett's early 1950s. Drew the “Ibis the Invincible” feature in the last issues of WHIZ COMICS(#139 - #155). Tillmann Courth spotted him in these books and will keep looking.
"Jokerface" keeps drawing minor characters with cartoony elongated faces.

Genre
horror-suspense
Synopsis
The chemist Branum Todd develops a fluid which transports his will into other people. Something goes wrong when Todd experiments with it.
Reprints

Return of the Dead! (Table of Contents: 5)

Genre
horror-suspense
Characters
The Mummy (Horror-Host)
Synopsis
Gypsy woman Cantina is a powerful medium who can not only contact the deceased, but bring them back into life. When gangster boss Britt is revived, Cantina's lover Jan protests and springs into law-abiding action.
Reprints

Previous indexer suggested George Evans ? for art credits.
It is Bob McCarty, a Evans-lookalike who also worked at Fawcett in these years.