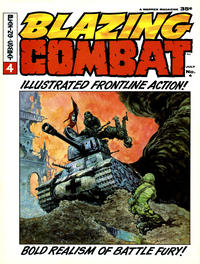 Give and Take (Table of Contents: 7)

Genre
aviation; war
Characters
U.S.A.F.; Adolf Hitler (villain); the Luftwaffe (villains, some die); unnamed Oberleutnant (villain, ME-262 pilot); General Adolf Galland (villain, pilot)
Synopsis
An officer of the JV-44 Commando Fighter Group gathers around his plane and was reminded that, back in 1938, that General Galland took up the ME-262 for a test flight, and he was impressed. But Hitler was not impressed and only viewed the plane as a blitz bomber, not a fighter, thus destroying its effectiveness, and slowing the plane down enough to be shot down by enemy fighters. Thus, the plane never realized its full potential, and because it was so late in the war, which was as good as lost, the officer is ordered to set fire to his plane.
Reprints
Keywords
Luftwaffe; ME-262; Salzburg Aerodrome; World War II

Thommy Burns, in Fantagraphics "Atomic Bomb and Other Stories, Illustrated by Wallace Wood" (2020), states that Goodwin plotted the story and Wood scripted it, as well as also lettering the story (changes made in credits above). No mention of Adkins having anything to do with the inks, so ? placed by his name.

The Trench! (Table of Contents: 9)

Easy Way to a Tuff Surfboard! (Table of Contents: 12)