The Mansion of Missing Persons! (Table of Contents) 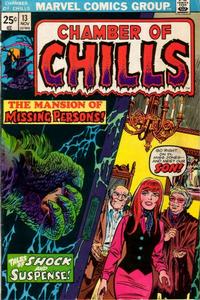 When the Creature Escapes (Table of Contents: 1)

Job Number
[L-657]
Genre
horror-suspense
Synopsis
A sea creature is captured and brought to an atomic testing facility. It attempts to communicate telepathically with the man who brought it there, but the man thinks it is evil and resists it. When it gets out of the tank, the man acquires a gun and hunts it down to kill it. After he does so, he encounters scientists who tell him that the creature shut down an out of control atomic pile saving all of their lives.
Reprints

Story incorrectly cited as being a reprint from Mystery Tales #18.

Job Number
[D-638]
Genre
horror-suspense
Synopsis
Aliens from space are kidnapping humans to send back to their home planet for study in order to use the information gathered for conquest.
Reprints

Incorrectly states that this story is reprinted from Adventures into Mystery #18.

Job Number
[K-399]
Genre
horror-suspense
Synopsis
A man removes hex signs from his barn against his wife's wishes and is plagued by a series of misfortunes. She begs him to allow her to restore the symbol to ward away evil but he refuses to subscribe to such superstitious nonsense. He takes gravely ill and is lying on his deathbed when, one morning, he gets up no longer sick and opens the morning mail to find he has won the lottery. When he runs out to show her the check, thinking his string of bad luck was merely coincidence, he is shocked to find her...just finishing off the paint on the new good luck symbol decorating the barn.
Reprints

Incorrectly states that the story is reprinted from Astonishing Tales #4

Trapped by the Little Men! (Table of Contents: 5)

Job Number
[L-426]
Genre
fantasy-supernatural
Synopsis
When little men wake him from a sound sleep demanding that he come with them, a man realizes that his ancestor was Gulliver from "Gulliver's Travels"
Reprints

Pencils credit from www.atlastales.com. Story incorrectly cites Astonishing Tales #60 as the source of the reprint.

Job Number
[F-906]
Genre
fantasy-supernatural
Synopsis
A doctor for the poor takes all the money he has, five dollars, and goes to plead his case for the charity clinic to the wealthy land owner who wants to buy up the plot and shut it down. The greedy man wants five thousand dollars, not five dollars, and the doctor is shocked to discover that when he hands the bill to the man it has become a five thousand dollar bill.
Reprints