Death in a Long Dark Tunnel! (Table of Contents) 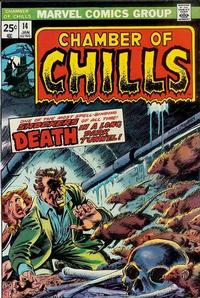 Men With Fangs! (Table of Contents: 1)

Job Number
[B-347]
Genre
horror-suspense
Synopsis
When a man is captured in a were-rat lair they want him to join their ranks, but he can only be turned if he agrees to be made immortal by the bite. At first he refuses, preferring death to such a disgusting fate, but when they threaten his wife he relents. They unchain the woman but she does not flee to the confusion of the man, until she shifts into were-rat form in order to apply the bite on her mate.
Reprints
Keywords
bat-men

In the comic the original source is credited wrongly as Tales of Suspense #25.

The Origins of Marvel Comics! (Table of Contents: 2)

The Origins of Marvel Comics / promo (ad from the publisher) / 0.7 page (report information)

Job Number
[E-524]
Genre
science fiction
Synopsis
An alien marries a homely Earth girl who is treated cruelly by those around her and gives her a ring that will protect her when the rest of his invasion force lands.
Reprints
Keywords
alien invasion

Prophet of Doom! (Table of Contents: 5)

Job Number
[L-412]
Genre
crime; fantasy-supernatural
Synopsis
A man who can tell the future robs a bank and has a vision of himself in a train wreck, only to have that vision cause the train to wreck. He escapes the wreck but is caught by the police.
Reprints

I Come from the Shadow World! (Table of Contents: 6)

Job Number
[T-474]
Genre
science fiction
Synopsis
A shadow creature from a shadow world comes to Earth to find if anything can stop it or it's race of shadow people.
Reprints
Keywords
alien invasion; shadow creature

Awesome Announcements and Autumnal Admonishments for All! (Table of Contents: 7)