Midnight in the Morgue! (Table of Contents) 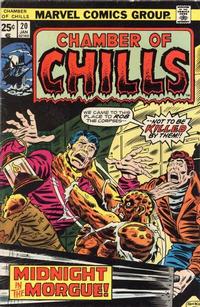 Killer at Large! (Table of Contents: 1)

The Midnight Visitor! (Table of Contents: 3)

Job Number
[L-230]
Genre
horror-suspense
Synopsis
A writer is surprised when he is confronted by the villain from his best-selling novel.
Reprints

Madness in the Morgue! (Table of Contents: 5)

Job Number
[D-775]
Genre
crime; horror-suspense
Synopsis
A criminal fleeing the scene of his crime hides in the city morgue, where he is driven mad by the fear of the corpses coming to life.
Reprints

Original titled Midnight in the Morgue. Story is erroneously credited as originally appearing in Men's Adventures # 24.

An Idiosyncratic Itinerary of Intangible Illusions and Imaginary Ideas Intended to Illuminate Your ID! (Table of Contents: 6) (Expand) /

Spider-Man and the Kidnap Caper (Table of Contents: 7) (Expand) /

Have a Marvel Christmas! (Table of Contents: 8) (Expand) /