[Put Another Nickel In] (Table of Contents) 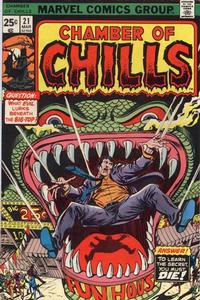 Put Another Nickel In!!! (Table of Contents: 1)

Genre
horror-suspense
Synopsis
Petty crook Jimmy DeParis kills a scientist during a robbery, and is later caught by the scientist's invention, which can predict the future.
Reprints

Original title: Tidal Wave of Terror
Art and script credits from the index for the original presentation.

Superman Vs. the Amazing Spider-Man / promo (ad from the publisher) / 0.5 page (report information)

The Girl with the Evil Eyes! (Table of Contents: 7)

Job Number
[M-165]
Genre
horror-suspense
Synopsis
A man finds a voodoo amulet that is said to allow one to see into the future. He has a dream that his brother will introduce him to a woman he plans to marry, but the girl is evil and tries to seduce the other brother into killing his brother so that she can marry him and inherit the money. After he wakes up, the dream events play out in real life up to the point the man introduces the girl to his brother, but the story ends asking the reader what the brother should do.
Reprints

A Kaleidoscope of Kinetic Kibitzing and Kooky Kommentary Kenned to Kindle your Karma! (Table of Contents: 8) (Expand) /

Spider-Man and the Cupcake Caper (Table of Contents: 9) (Expand) /