Volume number and the on sale date from the publication date found at the Catalog of Copyright Entries, Part 2, Periodicals, New Series, Volume 35, January-December 1940, Numbers 1-4. Class B periodical. Copyright number B 443609. 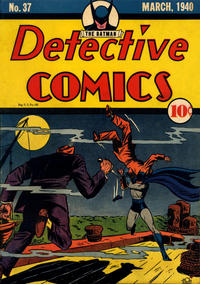 [The Screaming House] (Table of Contents: 2)

Genre
superhero
Characters
Batman [Bruce Wayne]; Joey (death); Al (villain, grocery store owner); Elias Turg [aka "The Head"; also as Count Grutt] (villain, death); Carl (villain)
Synopsis
While passing by an old house, the Batman hears screams and rushes in to save a man, who he soon discovers is a crook that has been double crossing his boss and who kills the thugs torturing him so there will be no witnesses. Later, the Caped Crusader learns from the dying Joey that his boss is a big time smuggler, and he takes immediate steps to solve that problem.
Reprints
Keywords
infra-red goggles

The last, illustrated panel, displays a promo for Batman's next adventure against huge, terrifying, man-monsters...a story which appeared in Batman #1 when Robin was introduced in the next issue of Detective.

[Ordered to March Across the Ocean] (Table of Contents: 3)

[Mutiny on the Sea Swan] (Table of Contents: 5)

Last appearance was in Detective #29.

Murder by Sea (Table of Contents: 7)

The Crime Roundup (Table of Contents: 11)