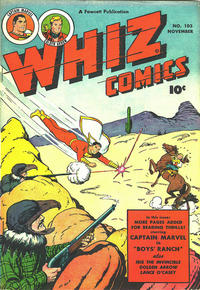 At Boys' Ranch (Table of Contents: 2)

Never Thought of It (Table of Contents: 3)

The Passenger Bandit (Table of Contents: 5)

Pencils and inks were originally attributed to Louis Cazeneuve but that was disputed by Martin O'Hearn at http://martinohearn.blogspot.com/2021/05/two-who-drew-lance-ocasey-and-one…

The Lamp of Three Wishes (Table of Contents: 14)

First Lance O'Casey strip in WHIZ COMICS since issue #53.
Pencils identification as Kurt Scaffenberger by Saltarella, who states that he is certain that the inks are not by Scaffenberger.
Martin O'Hearn identifies the pencils and inks as Louis Cazeneuve at http://martinohearn.blogspot.com/2021/05/two-who-drew-lance-ocasey-and-one…