A Comedy of Eras! (Table of Contents) 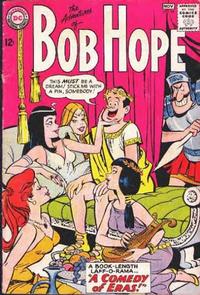 Smoking Is for Squares! (Table of Contents: 1)

"Published as a public service in cooperation with the National Social Welfare Assembly, coordinating organization for national health, welfare and recreation agencies of the U.S." Paulette Breen is "winner of the Palisades Amusement Park National Contest."

Nothing Else Is Silly Putty! (Table of Contents: 5) (Expand) /

The damming of the Nile echoes the controversial dam that flooded the site of the temple of Abu Simbel at the time. The entire issue springboards from the current movie spectacular "Cleopatra," starring Elizabeth Taylor, Richard Burton, and Rex Harrison -- although Antony in the story has the face of Marlon Brando.

First Line of Dialogue or Text
Hello, little girl...
Genre
humor; children
Characters
Bebe; zookeeper
Synopsis
Bebe is shocked to learn that a kangaroo is a native of Australia... her uncle married such a native.
Reprints
Keywords
kangaroo; zoo