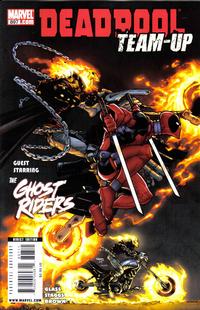 Genre
superhero
Characters
Deadpool; Ghost Rider [Johnny Blaze]; Ghost Rider [Dan Ketch]; VILLAIN: Xaphan
Synopsis
Deadpool is hired by a bearded lady and a little person (DP would call him a "midget" and does), to rid the town of Gibsonton, Florida of tyrannical freak show owner Lobster Boy. Unfortunately, Lobster Boy has been possessed by a powerful demon and 'Pool teams up with the Ghost Rider brothers to take him down.
Reprints

There are aspects of this story based on fact as Gibsonton, Florida, also known as "Freakville," is the notorios stomping ground of circus performers during the off season; Grady Franklin Stiles Jr., a.k.a. "Lobster Boy," resided there and was shot to death in 1992 by a circus sideshow performer hired by his family because he was such a nice guy (he was a violent alcoholic and had murdered his oldest daughter's fiancé on the eve of their wedding). For further reading, please see "Lobster Boy: The Bizarre Life and Brutal Death of Grady Stiles Jr." by Fred Rosen.