Although the cover alludes to the title of the first story inside ("Love or Pity?"), the characters on the cover and their situation do not reference the interior story at all. 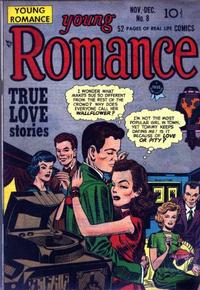 Genre
romance
Characters
Harlan Crain; Ginny Crain; Mrs. Crain; Ken Davis; Perry Crain; Mr. Brandon; Marty; Angeline Parks; Cissy; Chester; Danny Sutherland
Synopsis
Ginny is engaged to Ken but their future plans are disrupted when her brother Perry is charged with mail fraud by the FBI. The press and public opinion turn against the Crain family and her father has to resign as head of the local college’s physics department. Ken stands by Ginny but she suspects he just pities her. Ginny leaves for the city but on the trip she meets Danny, who says there are people who support them. Ginny goes home and marries Ken. Perry is eventually cleared.
Reprints
Keywords
Red Scare

Although Perry is arrested by the FBI for "mail fraud," this story seems to allude to the anti-Communist "Red Scare" which began around 1947 in the USA.

Genre
romance
Characters
Aunt Martha Daniels; Sue Daniels; Jimmy Cameron
Synopsis
Sue clashes her with guardian Aunt Martha over Sue’s boyfriend Jimmy. When Aunt Martha learns Sue is planning to elope, she intends to stop it, but changes her mind and permits her to leave, even secretly giving Sue $500. Aunt Martha remembers her youth, when she allowed her father to prevent her marriage to a young man. That young man is now the beloved governor, and Martha is “a wasted, lonely old maid.”

Genre
romance
Characters
Irene; Frank Kennedy; Verne; Buzzy Bernard
Synopsis
Teenager Irene is attracted to her older sister Verne’s boyfriend Frank. While Verne is out, Irene dresses in her sister’s clothes and dates Frank, but feels out of place. She sees Verne dressed in Irene’s “bobby-soxer” outfit, dancing with Irene’s boyfriend Buzzy. Irene decides to act her age from now on.

A Lesson in Strategy (Table of Contents: 4)

To Love Again (Table of Contents: 5)

Love Can Strike so Suddenly! (Table of Contents: 6)