This is the first issue with a DC bullet on cover.

The on-sale date is the publication date reported in the U. S. Copyright Office filing in the Catalog of Copyright Entries, Part 2, Periodicals, New Series, Volume 35, 1940, Number 2. Class B periodical. Copyright number B 449540. The filing states that Detective Comics, Inc. is the publisher and copyright holder. 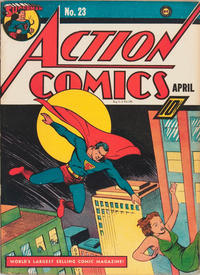 This is the first story with Luthor. Superman asks "Who is Luthor?" The second Luthor story appeared in Superman #4 (cover date Spring 1940). Luthor says "We encounter each other once more".
However Superman #4 may have gone on sale before this issue. In their copyright registration, Detective Comics, Inc. said Action Comics #23 was published Feb 23, 1940. An in-house ad said Superman #4 would go on sale Feb 15; the copyright registration said that it was published Jan 23. Officially, per DC Comics web site, Luthor's first appearance is in Action Comics #23.

The last panel of this story is an illustrated promotional ad for the Sandman in Adventure Comics.

[Trouble at the Mine] (Table of Contents: 5)

No. 1 - Treasure Island, by Robert Louis Stevenson (Table of Contents: 8)

[The Man with the Rubber Face] (Table of Contents: 13)

The Treasure Tower (Table of Contents: 18)