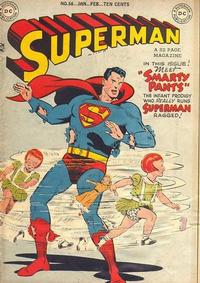 The Prankster Picks a Partner! (Table of Contents: 3)

Formerly credited to Bill Woolfolk, but it's not in his pay records per Martin O'Hearn

The Man with the Purple Hand (Table of Contents: 5) (Expand) /

The Man Who Couldn't Laugh! (Table of Contents: 6)

Plot revised and re-used in Superman (DC, 1939 series) #136. Formerly credited to Bill Woolfolk, but it's not in his pay records per Martin O'Hearn.

First Line of Dialogue or Text
Why are you crying, Stover?
Genre
humor; children

The Spark of Life (Table of Contents: 13)

First Line of Dialogue or Text
The Chief said the animals are being molested at night...
Genre
humor

First Line of Dialogue or Text
Before I leave, I'll have to write Doodle a note...
Genre
humor

First Line of Dialogue or Text
Hey, Shorty! Will you deliver this package for me?
Genre
humor; teen