Joe Shuster's signature is at the bottom left corner of the cover and is usually cut off in part or in full on many copies of this issue. 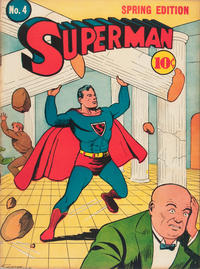 [Superman versus Luthor] (Table of Contents: 3)

First Line of Dialogue or Text
For the first time in its history, the City of Metropolis is ravaged by a terrible earthquake!
Feature Logo
Superman [over-lapping P, skinny letters]
Genre
superhero
Characters
Superman [Clark Kent]; George Taylor; Professor Martinson; phony Professor Martinson (villain, death); Luthor (villain, with red hair, second appearance)
Synopsis
When Clark Kent begins to investigate a new weapon being tested by the Army that artifically causes earthquakes, little does he know that Lex Luthor is hot on the trail of securing the plans for that invention, one way or the other.
Reprints
Keywords
Daily Planet

One panel promotional advertisement for the Spectre series in More Fun Comics (DC, 1936 series) at the end of the story, with art by Bernard Baily.

First Line of Dialogue or Text
Oil Paintings for Sale!
Genre
anthropomorphic-funny animals
Characters
Shorty (a dog)
Synopsis
Shorty is standing outside an artist's studio and sticks his head in the window to watch him paint. When the artist leaves, Shorty goes in and eyes the picture: of a steaming turkey! When the artist returns, the turkey is missing from the picture and Shorty is licking his chops.
Reprints

Genre
non-fiction
Characters
Paul Muni (actor); Bill Dickey (baseball player)
Synopsis
Some of the facts related in these filler include: 1) New York Yankee catcher Bill Dickey loses about 8 pounds duiring a game; 2) a law in Nebraska states it's illegal to give away a cigar; 3) actor Paul Muni was once fired by a studio because he said he didn't know how to act; and 4) an usher, devoted to the stage, donated his skull after death to be used as the skull of Yorick in the play "Hamlet".
Reprints

First Line of Dialogue or Text
Bedlam reigns in the editorial office of the Daily Planet as a startling news flash comes over the wires....
Feature Logo
Superman [over-lapping P, skinny letters]
Genre
superhero
Characters
Superman [Clark Kent]; George Taylor (cameo); Lois Lane; Luthor (villain, with red hair); Luthor's henchmen (villains, some die)
Synopsis
Superman faces off once again with the evil Luthor, who first has tapped oil from oil wells all over the world for his purposes, then inundating the western coast of the U.S. when he raises a glass-enclosed city of ancient weird design from the murky depths.
Reprints
Keywords
Daily Planet

One panel promo for the Sandman, appearing in Adventure Comics, is found at end of the story, with art by Creig Flessel.

Changer of Destiny (Table of Contents: 9)

Genre
crime
Characters
George Rankin (death); the Crime King [Spurnelli] (villain, death); the President of the United States (unnamed)
Synopsis
George Rankin had invented a serum that speeded up his time rate, living 31,536,000 times faster than the rest of the world. What to everyone was a mere second was actually a year to him! But the effects of the formula would only last one year, and Rankin had something important to accomplish before that year was up.
Reprints

[The Economic Enemy] (Table of Contents: 10)

One panel ad for Batman appearing in Detective Comics appears at the end of the story, with art by Bob Kane.
Superman logo is a one-off hand-drawn version by Joe Shuster, though now very close in design to the one on the cover of Superman #1.

First Line of Dialogue or Text
The original 'Popeye'
Genre
non-fiction
Characters
Ed Barnett (one-armed football player); Mrs. D. Beach
Synopsis
Some of the facts covered in this filler include: 1) a Santa Barbara grapevine, the largest in the world, which yields ten tons of grapes per year; 2) the common slug has 30,000 teeth; 3) a Mrs. Beach walked from New York to Chicago in 42 1/2 days back in 1912; 4) the "popeyed chameleon" is capable of looking in different directions at the same time; and 5) in 1930, one-armed football player Ed Barnett caught four forward passes and intercepted three others in a game.
Reprints

Some information added by Craig Delich.

Pioneer Into the Unknown (Table of Contents: 14)

Genre
science fiction
Characters
James Rolland (death); Professor Greystroke (scientist-inventor); Bixby (press agent)
Synopsis
Actor James Rolland, upon leaving Mammoth Studios, is approached by an inventor, who tells him that he owes everything to the actor for his invention of a giant crystal-like globe he calls the space-folder! He furthers states that Rolland will be the first person to use that invention to travel to a distant spot in the universe. Rolland steps into the globe and disappears, but, unfortunately, re-appears in the center of the sun...and perishes! As a footnote, in the future of 1982, in the Museum of Interstellar History, Rolland is honored for paving the way for interplanetary space travel.
Reprints

[Terror in the Trucker's Union] (Table of Contents: 15)