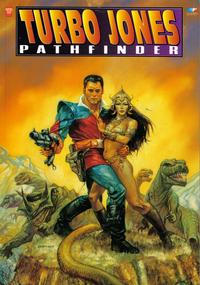 Artist credited as Vanyo which could either or both of Eduardo Vañó Ibarra and Vicente Vañó Ibarra.

This book credits Vanyo with all the art for the Turbo Jones stories. However, Phil Boyce in his 'The Oink Blog' notes that the preview issue story was drawn by Ian Kennedy before the art chores were passed on to Vanyo.

The Wildcat Complete (Table of Contents: 7)