Slaves of the Hulk (Table of Contents) 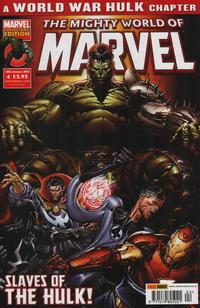 The Mighty World of Marvel (Table of Contents: 1)

Synopsis
Introduces this issue and recaps the story arc.

Genre
superhero
Characters
Hulk; Rick Jones; Miek; Dr. Strange; Hiroim; Elloe Kaifi; Korg; She-Hulk; Ares; Ms. Marvel; Mr. Fantastic; Immortal Fist; Spider-Man; Invisible Woman; Thing; Storm; Black Panther; Black Bolt; Thor (Clone); Goliath; Sentry
Synopsis
Dr. Strange has channelled the powers of a demon called Zom but is consumed by the power and rage. The Hulk shows Strange how to control your rage and power by defeating him. Now all of the heroes are trapped and tagged with a obedience disk which will force them to fight one another in the arena. Iron Man is defeated by Mr. Fantastic and the Hulk calls for death. With that, the Sentry decides to fight.
Reprints

Job Number
V-869
Genre
superhero
Characters
Hulk; General Thaddius Ross [Thunderbolt Ross]; Rick Jones
Synopsis
Rick manages to save the Hulk by redirecting the rocket back to Earth. Initially the Hulk blames Rick for what happened. Just before the Hulk hits Rick he suddenly becomes like a robot and obeys Rick's commands. However when Rick falls asleep his control of the Hulk ends. Rick locks the Hulk back up in escape-proof cell that Bruce Banner built himself.
Reprints