The Hulk Versus The Sentry! (Table of Contents)

Signed but hidden by bar-code. 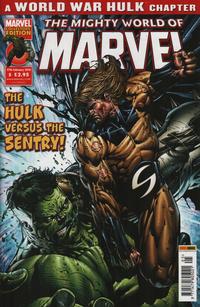 The Mighty World of Marvel (Table of Contents: 1)

Synopsis
Introduces this issue and recaps the story arc.

Genre
superhero
Characters
Rick Jones; Thing; Invisible Woman; Miek; Mr. Fantastic; Iron Man; Korg; No-Name; Elloe Kaifi; Hiroim; Hulk; Dr. Strange; Black Bolt; General Thaddius Ross [Thunderbolt Ross]; Ares; Black Panther
Synopsis
Hulk and Sentry go toe to toe! Sentry unleashes his power and begins to realize that he cannot stop himself. Hulk ultimately defeats Sentry with both of them exhausting their powers. Miek attacks Rick Jones, forcing the rage of Bruce, bringing out Hulk in him. Hulk then attacks Miek who finally admits that it was he who caused the ship to explode. Hulk's rage begins to manifest itself, exploding across the whole east coast. Hulk calls for Tony to attack him with his satellites, leaving behind nothing but Bruce. But his rage lives on as someone arises from the murk on Planet Sakaar.
Reprints

Birds of Stymphalis (Part One of The Incredible Herc) (Table of Contents: 7)

Genre
superhero
Characters
Amadeus Cho; Hercules; Angel; Namora; SHIELD; Gabriel Jones; Hulk; Hiroim; Spider-Man; Ares; Doc Samson; Wonder Man; Megara; Theseus; Miek; Black Widow
Synopsis
The Renegades allow themselves to be caught by SHIELD. Amadeus Cho tries in vain to convince Hercules to fight. Hercules has to face Ares who now believes he has his chance to gain revenge. Hercules realises that he does not want to submit to Ares and breaks out with Cho. Cho has also managed to acquire the laptop of Commander Jones and plans to destroy SHIELD.
Reprints