The Day the World Turned Slower (Table of Contents)

The cover resembles a movie poster, including the credits. 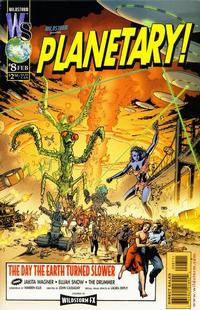 The Day the World Turned Slower (Table of Contents: 1)

Genre
science fiction; superhero
Characters
Planetary [Elijah Snow; Jakita Wagner; the Drummer]; Allison; Randall Dowling (cameo-flashback); Anna Hark (cameo-flashback)
Synopsis
Planetary is contacted by a woman named Allison, who relates to them the horrors of Science City Zero. City Zero was an experimental base where people disappeared during the height of the “Red Scare” and were subjected to scientific tortures designed to test the limits of the human body.
Reprints

Credits include "with special thanks to Wendy Fouts."

Some of the monsters and mutated humans are reminiscent of the B-Grade science fiction movies of the 1950s and 1960s.