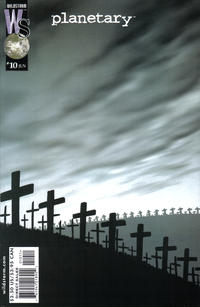 Magic and Loss (Table of Contents: 1)

Genre
science fiction; superhero
Characters
Elijah Snow; the Planetary clean-up team; 2 unnamed aliens from a doomed planet; another alien, a member of a legion of alien policemen; a mother and her grown daughter from a hidden civilization on Earth; William Leather; Randall Dowling
Synopsis
As the Planetary clean-up team gathers various items from the Four Voyagers Plaza, Elijah looks at 3 artifacts and wonders about their history. The artifacts are a blanket with alien symbols on it, a pair of golden wrist bands, and a blue, alien lantern. The owners of the artifacts were killed by the Four.
Reprints

The three artifacts and their history are reminiscent of Superman (the blanket); Wonder Woman (the bracelets), and Green Lantern [Hal Jordan] (the lantern).