The Flaming Darkness! (Table of Contents) 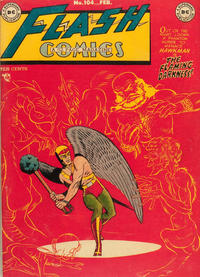 The Flaming Darkness! (Table of Contents: 3)

The Rival Flash! (Table of Contents: 5)

Job Number
FL 110
Genre
superhero
Characters
The Flash [Jay Garrick] (origin recap); Joan Williams; The Rival (villain, introduction)
Synopsis
The Flash is captured and forced to breathe in the by-product of hard water gasses so that he loses his speed. His place is then to be taken by a mysterious masked Flash with criminal tendencies.
Reprints

The Case of the Painted Horse! (Table of Contents: 8)

The Vanishing Lighthouse! (Table of Contents: 9)

First Line of Dialogue or Text
The bark of a dog is an artificial development of civilization...
Genre
non-fiction
Reprints

Job Number
FL108
Genre
superhero
Characters
Black Canary [Dinah Drake]; Larry Lance; Professor Ernest Nythe (nephew of Lane Nythe, death); Professor Lane Nythe (villain)
Synopsis
A criminologist and professor at State College are working together on an unsolved murder mystery, and the nephew uncovers some new angles on the case, but is murdered. Black Canary and Larry then uncover a twist in that old case that nearly costs them their lives.
Reprints

Inks credit in Archives is wrong.