This issue is Red Shield Continuity #32, and went on sale on time. "Printed by World Color Press, Inc, Montreal, QC, Canada. 03/03/10." It also features "Last Stand of New Krypton" promotion on the cover. 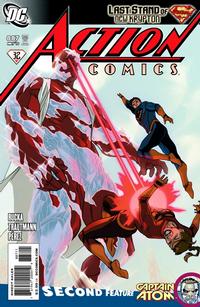 Truth to Power (Table of Contents: 1)

Story continued from last issue and continues in the next issue.
"Thanks to Matthew Sturges."

Special Sneak Preview - Case One: The Dastardly Death of the Rogues (Table of Contents: 3) (Expand) /

The Flash / preview (from the publisher) / 6 pages (report information)