The Crabmen of Paris!! (Table of Contents)

Signature (to the right of the green figure's back) noted by Barry Sandoval, October 20, 2005. Art originally credited to Ernest Schroeder. 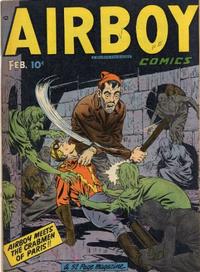 [The Crabmen of Paris] (Table of Contents: 1)

Genre
adventure; aviation
Characters
Airboy [David Nelson II]; Jacques DeGrasse (French diplomat); Monsieur Reynard (lawyer); Mrs. Reynard; Monsieur Duval (Chief of Police); Alphonse; the Crabmen of Paris [Louis; the Count; the King; Madame Guillotine; others un-named] (villains, all die)
Synopsis
Young Jacques tells Airboy secretly that 35 men have disappeared in a span on 10 days, some of them being prominent government officials. Airboy discovers that each of the men were related directly to someone who was a leader of the people in the French Revolution......and Jacques is one as well. And all disappeared in the area of large sewer openings, which could be the hideout of the legendary Crabmen.
Reprints
Keywords
Birdie

[The Rider of Tulan Kong] (Table of Contents: 2)

The Pirate King (Table of Contents: 3)

The Big Cat (Table of Contents: 4)

The Day It Rained Baseballs (Table of Contents: 6)

[The Pirates of the Nile] (Table of Contents: 7)

Genre
horror-suspense
Characters
The Heap [Baron Eric von Emmelman]; Ibn Shammar (son of the Prince); Admiral Stoddard; Ali Ben Dassu [aka Prince Abu Shammar Pasha, ruler of Khal Bakir Province] [aka Bukari] (villain, a sailmaker, death)
Synopsis
The son of the ruler of Khal Bakir Province is turned out of the house because he was raised by an Englishman. He finds the Heap, travels with him, until one night a kindly old sailmaker is discovered by the Heap to actually be a pirate that was hijacking his father's goods and Ibn Shammar is ordered to stop the pirate. When he does, he is in for the shock of his life!
Reprints
Keywords
deserts; freighters; Nile River; rifles; sailing ships

Pencils and inks credits from Hames Ware via a private e-mail to Roy Thomas (22 March 2013).
The story title is taken from the table of contents of Roy Thomas Presents the Heap (PS, 2013 series) #2.