The Barker Tires of the Big Top (Table of Contents) 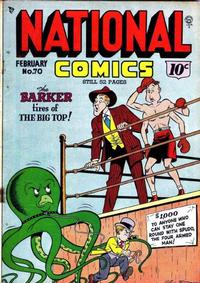 The Barker Tires of the Big Top (Table of Contents: 1)

This story is basically the same as Dibble's "Johnny Doughboy" story in Military Comics #16 (February 1943).

First Line of Dialogue or Text
While I'm out, Lassie, try to entertain Uncle Balty and keep him happy!
Genre
humor; children
Characters
Lassie; Roberta; Uncle Balty
Synopsis
Uncle Balty is supposed to "avoid all excitement," but a visit to Lassie ruins that resolution.

Originally credited to Dan Zolnerowich. The pointed faces with eyes far apart and flying perons are all the trademark of Peter Riss.

It's interesting that Moony, on page 2 of the story, uttered a remark very similar to what Bruce Wayne did when he adopted the Batman identity from a bat flying through his mansion window. Moony states: "Moony, the Man From the Moon! That's what I'll be! I'll invade their stuffy coops by night, like a creature from a different planet!"

Three Strikes for a Jinx (Table of Contents: 7)

How to Be a Detective (Table of Contents: 8)

The art is identical to Kirkpatrick's work on several Sally O'Neil stories in National Comics and Hack O'Hara in Crack Comics. Many faces in profile popping in from the sides, bony noses in front view, very wide trouser legs, and also rather still standing figures.