Midnight doesn't kid with Willie the Kid! (Table of Contents) 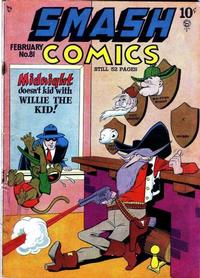 Wanted Dead or Alive: Willie the Kid (Table of Contents: 1)

First Line of Dialogue or Text
You're head is supposed to twirl in the same direction as your body
Genre
humor
Characters
Citronella; Awful Rumpus; Mr. Mazuma; Igor Twirlsky
Synopsis
Citronella tries to pass her pop off as a ballet master.

First Line of Dialogue or Text
But where's His Royal Majesty?
Genre
children; humor
Characters
Archie O'Toole (king)
Synopsis
The king is out playing with his model plane.

The Face of Terror (Table of Contents: 4)

Faces, figures in bird view, hands and foreshortening movements of figures, and many close ups are all very much like Rosenberger's work on The Fly #13 and others in that series. His protuding lower lips seems to be changed by the inker, but hints can be seen on page 5.

[Four Secret Steps to Mastery Over Men] (Table of Contents: 6)

The Great Mongolie (Table of Contents: 8)

Originally credited to Sam Citron, but the outstretched leg movement and especially some V-shaped faces with eyes far apart must be Riss, and the inking is not far from his signed story in My Romantic Adventure #56.