Lost in the Andes (Table of Contents) 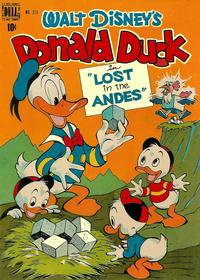 Inside front cover; black, red, and white. Art submitted on November 24, 1948. Synopsis by Michael Barrier from "Carl Barks and the Art of the Comic Book" (1982).

Lost in the Andes (Table of Contents: 2)

Genre
adventure; anthropomorphic-funny animals
Characters
Donald Duck; Huey; Dewey; Louie; Third Assistant Janitor; Professor Artefact McArchives; Tombsbury the First Assistant; Wormsley the Second Assistant; Captain; Ship's Doctor; Bright-Looking Guy; Vicuna Hunter; The President
Synopsis
Donald, a museum janitor, discovers that some "blocks" from Inca ruins are actually square eggs. When the other members of a scientific expedition fall ill, Donald and the nephews press on alone deep into the Andes. There they find a strange race of people who speak with Southern accents and live on the square eggs.
Reprints

Inside back cover; black, red, and white. Art submitted on November 24, 1948. Synopsis by Michael Barrier from "Carl Barks and the Art of the Comic Book" (1982).