The Mark of Zorro (Table of Contents)

Wraparound cover. Signed "Bill Ely" on back cover. A small black and white reprint of this cover is used in a subscription ad in The Lone Ranger (Dell, 1948 series) #20 (February 1950). 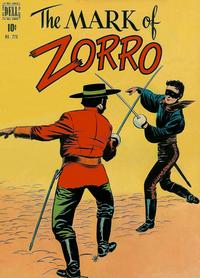 [Characters in the Story] (Table of Contents: 1)

Inside front cover and inside back cover; black and white. Pencils and inks credits for this sequence from Alberto Becattini (May 14, 2007).

The Mark of Zorro (Table of Contents: 2)

Genre
adventure; historical; western-frontier
Characters
Zorro [Don Diego Vega; aka the Curse of Capistrano]; Bernardo; Don Alejandro Vega; Don Carlos de Pulido; Dona Catalina (wife of Don Carlos); Lolita de Pulido (Don Carlos' daughter); Fray Felipe; Landlord; Sergeant Pedro Gonzales (villain); Captain Ramon (villain)
Synopsis
Captain Ramon seeks the hand of the lovely Lolita Pulido, but the senorita's parents wish her to marry Don Diego Vega, but she finds him dull. Don Diego, as Zorro, tries to get the senorita and her parents to help him fight the corrupt governor, but her father calls for the soldiers. Lolita is infatuated with Zorro, who has to protect her from Captain Ramon's unwanted advances. Ramon convinces the Governor to jail Lolita and her family. Zorro then organizes a party to free the Pulidos from jail.
Reprints

Adapted from the 1924 novel "The Mark of Zorro" by Johnston McCulley.

Signed "Bill Ely" on first and last pages of the story.

Color illustration by artist Ely, featuring a take on the Zorro story found inside the issue.