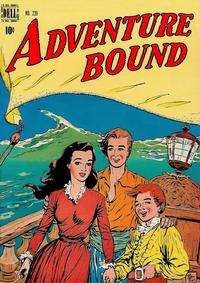 Inside front cover; black and white. Text and illustrations.

Genre
adventure
Characters
Paul Clark; Nat Clark; Maria Rosaria
Synopsis
Boston, 1723. Paul Clark runs away to sea aboard The Boston Belle. Unbeknownst to him, his 8-year old brother, Nat, has followed, and stows away. Maria is a passenger. Her late mother was English. She travels to join her father, the governor of Trinidad Island. She befriends Nat and Paul. Paul is wounded defending her from the Pirate captain, Redbeard, who loots the ship, and takes them hostage. Paul walks the plank, but Maria and Nat throw him a rope, and pull him back aboard through their cabin window. Nat dances for Redbeard, and, as reward, Paul is allowed to join the crew. Fleeing a battle with a British Man o' War, the pirate ship beaches in the cove of a small island. Paul, Nat, and Maria escape to a little inlet aboard a small boat. Just before dawn, the pirate ship's powder magazine explodes, the ship is blasted to bits, and all its crew perish. A tall ship of war appears, flying the flag of Spain. A young ship's officer bows to Maria (daughter of the governor of Trinidad) and explains, "We saw the light of the explosion, Señiorita." They are saved! Paul and Nat are once more ... Adventure Bound!

Writing credit and synopsis supplied by David Porta (November 2006). This comic is presented with no word balloons. The story is told with borderless panels, and captions, including dialogue in quotation marks, like the Prince Valiant comic strip.

Back cover. Text and illustration.