On-sale date from copyright registration. On-sale date of January 8 in ad in Leave It to Binky #7.

First Line of Dialogue or Text
Superman, what were you like when you were a boy?
Genre
superhero
Characters
Superman
Reprints 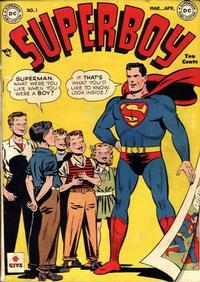 The Man Who Could See Tomorrow! (Table of Contents: 2)

Really a Superman story with the Superboy segment as a flashback.

The Boy Vandals! (Table of Contents: 6)

The Language of the Sea (Table of Contents: 9)

First Line of Dialogue or Text
What's all the shooting about?
Genre
humor; western-frontier
Reprints

Though it is not in his pay records, per Martin O'Hearn, Dorothy Woolfolk and P. C. Hamerlick confirmed Bill Woolfolk as the scripter of this story in Alter Ego #158 (May 2019). Art credits per Bob Hughes.

First Line of Dialogue or Text
It's a beautiful day for a hike in the hills!
Genre
humor
Reprints