The host introducing most of the stories in this magazine is a character who first appeared in Weird Mysteries (Pastime Publications, 1959 series) #1 (March 1959). He is not introduced by name in this issue, but calls himself "your Morgue Keeper." In Weird Mysteries the character was called "Morgue'n." This may imply that the material presented here was originally planned for the never-released second issue of Weird Mysteries.

The art credits for unsigned stories were reviewed for Alter Ego by Michael T. Gilbert, Hames Ware, Jim Vadeboncoeur, Jr., and Dr. Michael J. Vassallo, who confirmed the existing GCD credits and added Battefield as artist for "Shroud Number Nine," though they suspect Powell’s "The Suckspect" and Morrow’s "Burn" were re-touched in-house or drawn with the aid of assistants.

Always Room for One More (Table of Contents) 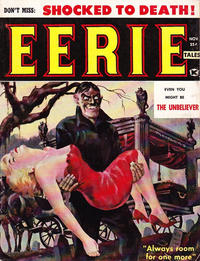 The Stalker (Table of Contents: 2)

The Suckspect! (Table of Contents: 4)

The Unbeliever (Table of Contents: 8)

Shocked to Death! (Table of Contents: 9)

From the Greyble to the Grave! (Table of Contents: 10)

Lower Than Hell! (Table of Contents: 12)