This issue includes a loose 9 cm x 15 cm subscription card featuring artwork of Mario jumping on a Goomba.
This issue has variants: 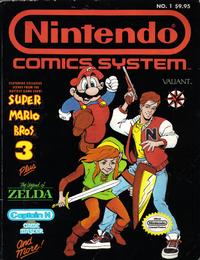 First Line of Dialogue or Text
Comics for Nintendo players!

The Legend (Table of Contents: 2)

Welcome to Videoland (Table of Contents: 5)

The First Fight (Table of Contents: 7)

One name from the credits ("Diane Dua") appears to be cut off by a strip of yellow spanning the top of the page.

The Fish That Should've Gotten Away (Table of Contents: 9)

The page previous to this story states that the story was created on stage in front of news and TV cameras at a press conference that announced Nintendo Comics System. It says that "The Fish That Should've Gotten Away" was the first story created for the series.

The Mario Bros. Guide to Grooming Your Moustache (Table of Contents: 11)

Continued in "Choices" on the next page.

Continued from the previous story, "Assault."

The Adventures of Dirk Drain-Head (Table of Contents: 15)