The Doll Man Loses His Identity (Table of Contents) 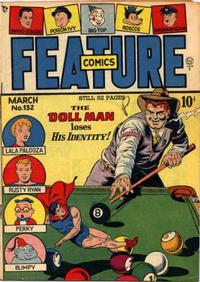 The Doll Man Loses His Identity (Table of Contents: 1)

First Line of Dialogue or Text
You really think you can train the animal to act human, eh?
Genre
humor

Originally credited "Bill Ward ?"
The art is similar to Kirkpatrick's work on several Sally O'Neil in National Comics and Hack O'Hara in Crack Comics. Many faces in sideview popping in from the sides, bony noses in frontview, very wide trouser legs, and also rather still standing figures. Inking uncertain, as she had much pencil work for Quality Comics.