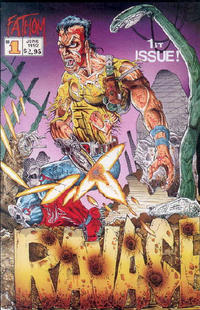 Contains a credit for Uncle Farley as "Mascot"

Dust Off (Table of Contents: 3)

Chapter 2: Torture is Too Kind (Table of Contents: 4)

Credits note that (although this issue was published in 1992) Tim Vigil penciled chapter 2 in 1988.

Chapter 3 is uncredited, but appears to continue the style from Chapter 2, while the Epilogue art does appear different and is credited accordingly. To reflect this, Chapter 3 has been credited the same as Chapter 2.

Epilogue is printed on the back cover in black and white.