On sale date from the publication date found at the Catalog of Copyright Entries, Part 2, Periodicals, New Series, Volume 35, 1940, Number 2. Class B periodical. Copyright number B 444322. 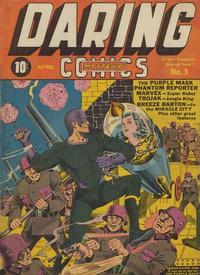 [The Escape of Red Corker] (Table of Contents: 2)

Prior pencil credit to Joseph Cal Cagno for reasons not clear. Tentative credit to Gus Ricca from the Masterworks.
Chesler shop material.

In the Miracle City (Table of Contents: 3)

Genre
adventure; science fiction
Characters
Breeze Barton (introduction, origin); Ann Barclay (introduction); Zanoba (a scientist, introduction); Mubahn and the demon people (vilains introduction for all)
Synopsis
While on a scouting expedition in 1945 in South Africa, Breeze discovers a Japanese Army marching toward British territory, but is shot down. Making his way to Miracle City, a young girl escorts him to a scientist named Zanoba, who is later captured by the Demon People, and Breeze heads out for the rescue.
Reprints

[Mystery of the Swabert Mansion] (Table of Contents: 4)

Dennis Burton appeared as the Laughing Mask in the previous issue, but is the Purple Mask in this issue and the next.

Will Harr's signature is in the splash panel, but Maurice Gutwirth's is in the 3rd-to-last panel of the story.
Chesler shop material.

[The East Side Murders] (Table of Contents: 5)

First Line of Dialogue or Text
Meet the Phantom Reporter!...
Genre
superhero
Characters
The Phantom Reporter [Dick Jones] (introduction); a park commissioner; various corrupt officials (villains, introduction for all); Max; other gangsters (villains, introduction, death for all)
Synopsis
Cub reporter Jones is assigned a case in which seven families on the east side of town have been wantonly beaten, resulting in three deaths. He soon discovers, as the Phantom Reporter, that the Park Commissioner, Police Chief and the publisher of several newspapers were behind it all... each having vested interest in the property on the east side, and hoping that the crime wave would get people to vacate their property so they could pick it up cheaply!
Reprints

Only golden age appearance. Next appearance in The Twelve (Marvel, 2008 series) #1.
Probably produced in-house / freelance. Erisman was a pulp editor for Goodman.

[The Devil Beast and the Nazis] (Table of Contents: 7)

Genre
jungle
Characters
Trojak; Edith Alton; Balu (the tiger); Sator (a bird); the Nazis (villains)
Synopsis
The native villagers tell Trojak of a strange beast that sneaks into their village every morning and takes one their tribal members away. After dealing with that menace, he then has to rescue Edith from the Nazis.
Reprints

The Masterworks reprint credits this to Joe Simon but this is not entirely correct.
Jim Vadeboncoeur, Jr. identifies August Froehlich as the artist of the last four pages, and sees his work in some of the earlier pages as well.
Henry Andrews is of the opinion that pages 1 and 2 are definitely Simon, but 3-9 are less clear. As for lettering, Simon used a distinctive "W" shape at this time, which is clear on all of pages 1 and 2, which have consistent lettering, but the lettering becomes less consistent for the remainder of the story. Even some of the definite Froehlich pages have what appear to be Simon lettering, although there may be an alternate explanation.

Note that this is right around the time that Simon left Funnies, Inc. to take the job of editor for Fox Publications, and most likely had to drop this assignment before its completion.

[The Origin of Marvex the Super-Robot] (Table of Contents: 8)

[Ali Hassan and His Desert Pirates] (Table of Contents: 9)

The Masterworks tentatively credits Harry Fisk, but as of January 2012 Jim Vadeboncoeur, Jr., via the Timely-Atlas list, states that this is definitely not Fisk. The heads may have been produced by a separate artist from the figures and backgrounds.

First Line of Dialogue or Text
It's a sure cure for what ails you!
Genre
humor
Characters
Dr. Hokom
Synopsis
The traveling medicine man is selling his "Palsy Walsy" tonic with no success.
Reprints