The Warrior-Apes of Voodoo Veldt (Table of Contents)

Cover has 3 titles; the illustration matches the third one, but none of the issue's stories. 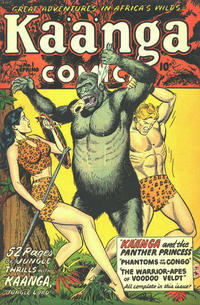 First Line of Dialogue or Text
Every living creature, who breathed the free jungle air, fell under the protection of Kaänga...
Genre
jungle
Characters
Kaänga; Ann Mason; Lance; N'ghana; Ka-winas (African tribe); Helen; Asika; Helena; Portia
Synopsis
A plane crash strands a trio of explorers on the rim of an ancient volcano. Kaänga and Ann offer assistance and they are all attacked by the Ka-winas, an ancient tribe determined to keep their home inside the volcano a secret. Kaänga uses the explorers' dynamite to ignite the volcano and destroy the Ka-winas and pushes the plane off the rim to glide to the jungle below. Kaänga and the explorers fly the plane into the Valley of Mist where they find Carthina, a lost Carthaginian outpost. Kaänga and his companions help restore the emperor to his throne after a coup by his daughter Portia.
Reprints
Keywords
air planes; ancient Carthage; bondage; Carthina (lost city); chariots; dynamite; gorillas; kuaki birds; leopards; lightning; lions; saddle zebras; storms; Temple of Silence; Valley of the Mist; volcanos

First Line of Dialogue or Text
Come, Ann... the gift I carved for chief N'tana is finished...
Characters
Kaänga; Ann Mason; Rainmaker; N'geeso; N'tana; Tuaka; El Cairn
Synopsis
A witch doctor, travels from village to village taking two maidens from each to use as "helpers." In reality, he is selling them as slaves. He takes Ann, and all the slaves are liberated by Kaänga.
Reprints
Keywords
Cavern of Mists; disguises; leopards; rhinoceroses; sedan chairs; slave auctions; slavery; stereotyping of Arabs

The Moreira credits are from the GCD entry for the original publication.

The Green-Eyed Monster (Table of Contents: 4)

First Line of Dialogue or Text
Kaänga, why do we take this stream? It flows so swiftly and the crocs are hungry!
Reprints