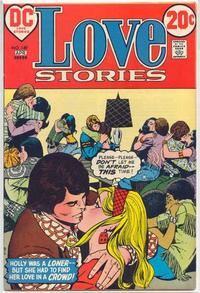 Job Number
D-946
Genre
romance
Synopsis
Shy Holly is relieved to find a boy that's just as shy as she is. But when she overcomes her shyness and Jeff does not, she doesn't think she can stay with him.

Art credits from Nick Katradis from the original artwork, as he confirmed with Katz, and sent in via the GCD Error Tracker. Inks formerly credited to Jack Abel.

His Other Wife! (Table of Contents: 3)

Job Number
D-737
Genre
romance
Synopsis
Carol doubts her husband Jason's love for her when she sees how differently he treats her from the way he treated his first wife.

The Three First Ladies of Comicdom! (Table of Contents: 4) (Expand) /

Job Number
D-1054
Genre
romance
Synopsis
Marcia is star-struck when she meets the famous Sean Saunders and he asks her out, but she doesn't think much of the way he treats her on their date.

Pencils credit from an invoice receipt in the possession of the artist's son Steve Saaf, and submitted via the GCD Error Tracker.

Job Number
R-176
First Line of Dialogue or Text
Help! I don't know what to do!
Synopsis
relationship advice