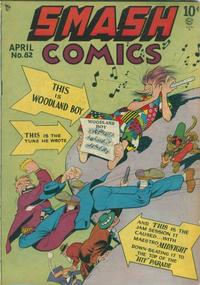 What Goes Up (Table of Contents: 4)

Mandu the Magician (Table of Contents: 6)

Genre
superhero
Characters
Jester [Chuck Lane]; Detective McGinty; Mandu the Magician; Ali
Synopsis
Detective McGinty is hot in the shoulderand the trail leads to a magician and his helper.

Originally cerdited to Sam Citron, but the outstretched leg movement and especially some V-shaped faces with eyes far apart must be Riss, last page, and the inking is not far from his signed story in My Romantic Adventure #56.