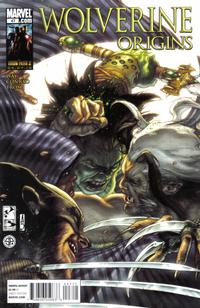 This page contains the indicia and credits for this issue with a recap of the story so far and an accompanying illustration.

First Line of Dialogue or Text
H-he killed him!
Genre
superhero
Characters
Wolverine; Daken; Romulus; Skaar; Cloak
Synopsis
Wolverine pretends to kill Daken to draw Romulus out into the open. Once his nemesis shows his face, he is attacked by Wolvie's ace-in-the-hole, Skaar. Romulus has brought reinforcements of his own, however, and sends Wolvie and his allies scrambling as he starts to blow up innocent civilians. Daken decides to switch sides and joins Romulus.
Reprints

Story continues in Dark Wolverine (Marvel, 2009 series) #86. The title of the story appears only on the credits page.