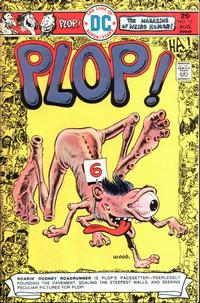 Framing sequence on first and next-to-last non-cover pages of issue. Amazing World of DC Comics #5 (1975), in promoting this issue, provided the following credits: “intros by Sergio Aragonés and Steve Skeates....” This ordering of credits seems to suggest that Aragonés originated the pages, and that Skeates added dialog to the art. The AWODCC credits appear to cover non-consecutive pages in this issue.

Job Number
ZA-314
Genre
humor
Characters
Dennis; Dennis's parents; Fido; Cookie Jar Genie; Freddy's parents; Eve (host)
Synopsis
Dennis gets a puppy for his birthday and mistreats it, until a genie grants both Dennis and the puppy a wish.
Reprints

Dennis's parents look very much like Dennis The Menace's parents.

Look What You Can Make with an Alabe Play Lab Kit! (Table of Contents: 5) (Expand) /

Job Number
ZA-512; ZA-510
First Line of Dialogue or Text
Yes, as a matter of fact I do have some experience!
Genre
humor
Characters
a vampire; Frankenstein
Synopsis
A vampire applies for a job at a blood bank; Frankenstein waters a potted palm.

Job Number
ZA-103; ZA-479; ZA-506
First Line of Dialogue or Text
No, No -- Just the peanut, stupid!
Genre
humor
Synopsis
An elephant eats the person feeding him a peanut; a bear appears to a camper, wearing a sign about preventing forest fires; Mrs. Potter has been swallowed by a crocodile.

Learn the Secret Powers of the Deadliest Killers in the Orient (Table of Contents: 10) (Expand) /

Damien's Aunt Had to Take the Kid (Table of Contents: 12)

Job Number
ZA-125
Genre
humor
Characters
Damien Daniels; Damien's aunt; circus owner; Rudy The Midget; animal wranglers; Cleo (snake); gangsters; talking ant; Cain (host)
Synopsis
Damien runs off to join the circus, which is such a disaster that he returns to his abusive aunt. There, he unwittingly causes tragedy to befall her.

What to Sink Your Teeth into When You're Hungry and You're Not a Werewolf. (Table of Contents: 15) (Expand) /

We Have a Limited Supply of These Other Issues! (Table of Contents: 21) (Expand) /

Job Number
A-124-D; ZA-507
Genre
humor
Synopsis
A pigeon is keeping score of the hats he has hit; a man feeding pigeons becomes a snack for a large bird.
Reprints