Day of Death (Table of Contents)

Hi-Fi Design (Brian and Kristy Miller) signs with a stylised *. 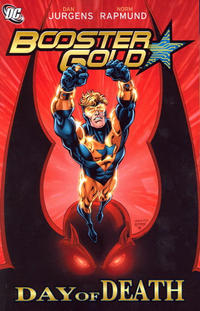 The launch of a poorly-shielded, four-passenger space flight is meant to evoke the origin of Marvel's Fantastic Four.

Genre
superhero
Characters
Booster Gold; Rip Hunter
Synopsis
Booster and Rip return to 1952 so Booster can finally have his moment of fun.
Reprints

Genre
superhero
Characters
Booster Gold; Skeets; Rip Hunter; Black Beetle; Batman [Dick Grayson]; Superman (cameo); Batman [Bruce Wayne] (cameo); Joker (in photos); Barbara Gordon (in photos)
Synopsis
After an encounter with the Black Beetle at Vanishing Point, Rip decides that Booster needs to do a better job of covering his tracks. He sends Booster to the Batcave to retrieve the file on Booster kept by the Batman, the only person who knows that Booster protects the timeline. But there, Booster encounters the new Batman, Dick Grayson. While Booster tries to explain the situation to Grayson, the Black Beetle appears. Deciding he would rather there not be a Batman, the Black Beetle leaves, and suddenly Grayson is gone and a second memorial Robin costume is on display in the Batcave.
Reprints

Day of Death, Part II of IV (Table of Contents: 6)

It is unclear who is wearing some of the costumes in the timeline created by the death of Dick Grayson. The Blue Beetle may in fact be the Red Beetle.

Day of Death, Part III of IV (Table of Contents: 7)

Genre
superhero
Characters
Booster Gold; Skeets; Rip Hunter; Black Beetle; Trigon; New Teen Titans [Changeling; Starfire [Koriand'r]; Kid Flash [Wally West]; Robin [Dick Grayson]; Wonder Girl [Donna Troy]; Cyborg [Vic Stone]; Raven]; Justice League of America [Superman; Green Lantern; Aquaman; Hawkman; Black Lightning; Flash; Wonder Woman]; Lex Luthor; Zatanna; Kyle Rayner
Synopsis
Raven arrives at Steve Dayton's mansion to find all of the Teen Titans dead. As Booster explains the situation, Rip arrives, and the three, along with Skeets, travel to 2020 where the death of the Titans led to Trigon destroying the JLA and conquering the Earth. The heroes encounter Zatanna and Kyle Rayner (who in this timeline never became a Green Lantern) who lead an underground movement against Trigon. But the time travelers' presence has been detected, so Booster allows himself to be taken away by Trigon's sentries to protect the underground, and is dropped at the feet of Trigon himself.
Reprints

It is unclear precisely who are wearing the Green Lantern, Flash, and Hawkman costumes in this alternate timeline.

Shadows of Tomorrow (Table of Contents: 10)